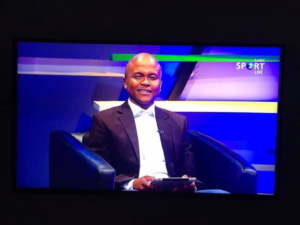 Jacques Sizwe Mbebe matriculated at the DSK in the year 2000. In September, he landed his dream job as a presenter for the Bundesliga LIVE show featuring the premier German soccer league on SABC 3 every week!

He is absolutely thrilled with his new job and would like to thank the DSK for all the support and opportunities that the school provided him during his time at the DSK. Sizwe says that without the school – he would never have visited Germany on two occasions, gained experience in his field and become an anchor for the live show.

Make sure to tune in this Saturday (17 October) to see Sizwe for the match of TSG Hoffenheim against Borussia Dortmund at 15:30h.

We wish you a shining future ahead of you, Sizwe! Congratulations!